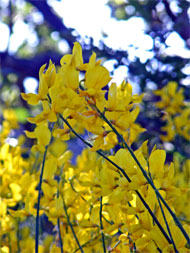 I’m standing by, bewildered, as Dutch Elm Disease picks off my elms one by one. And I’m wondering why what, in – say – England, would be a major national disaster, a loudly bemoaned and bewailed wholesale destruction of our countryside as we know it,  is being treated with such utter disregard here.

The first of my elms went last summer: one day fine, the next day it began dying from the top down, branch by branch. In the space of ten days it went from green and healthy to skeleton. As we chopped it down and sawed up the wood, we could see the tell-tale star-burst markings beneath the bark, a sure sign that the Elm bark beetle (Scolytus spp.) had been burrowing away, spreading the dreaded Ophiostoma novo-ulmi fungus. Now one tree is almost bare, and I can see clumps of dead leaf in the crowns of two more. Hyper-sensitive to the problem, I drive through the countryside and see one moribund tree after another. The hedgerows are looking almost autumnal. I’m not the only one who’s losing my elms.

But the fact that mine are dying is irritating. When we moved here, the area behind the chicken house was an impenetrable elm-jungle and I almost killed myself trying to get the accursed things out. In the end, I resorted to bringing in a bulldozer but even this extreme measure was only half-successful. I mean, dozens of unwanted  – indeed whole-heartedly loathed – specimens were ripped out; the ones which remained were given a very grudging reprieve by me, mostly in the interests of having a bit of shade in that corner of the garden but also because there were certain trunks arranged in elegant triangles which looked fine in what was to become (later, and not very smoothly) a lawn of sorts.

The great bulldozer-clearance did little, however, to solve the torture of a dense network of deep-red roots and sprouting elm-tufts – all over the lawn, through beds, in the drive… anywhere, in fact, where they’re very much not wanted.

Now, however, my attractive mini-stands of shade-giving elms are fast disappearing. That whole area will be a sun-bleached desert before long, with nothing to remember the elms by except horrible tufts just where I don’t want them.

I presume the fact that no one is getting het up about the elm situation is because they’re not considered a vital part of the scenery. Around here, they rarely grow huge and they absolutely never look elegant: those two qualities are reserved for oaks of many kinds, and perhaps limes in built-up areas, a few remaining chestnuts (these were decimated many years ago by blight), and, over the Tuscan border especially, cypresses. But our straggly, gangly elms are an important part of field-edges nevertheless, in their own unprepossessing and largely unnoticed way. When they have gone, the whole tapestry will look very different.

The disconcerting thing about it all is, that my research tells me that elms of less than about 15 years are largely immune to the fungus. Yet I’m seeing sad, brown saplings all over. Is this a new strain, I wonder?

While I’m on the topic of disease and death: I’m suffering butterfly-angst. Perhaps because of our wet spring, there are unusual numbers of the things. Unless these are brightly coloured, or wildly spotty, they make my heart stop with fear. Anything big and brown could be a gypsy moth. Can we really have escaped? Can last year’s plague no distance at all from here really have moved away in the opposite direction? I do so hope so.

One morbid thought draws another, and so on to snakes. They have dogged my steps this summer. Or my nets. After the two huge beasts which throttled themselves in the flimsy small-gauge netting around my vegetable garden in May I was fairly confident that I had – without meaning to – put a big dent in the large-snake population of this property. Then another problem arose: the potato-guzzling porcupine.

We’ve never really suffered porcupine damage around here. Porcupines signify never being able to grow a bulb. But either the porcupines never found them, or my daffodils and irises have remained inexplicably unpalatable, thankfully. Mario next door, and the housekeeper up the road had warned me a few weeks ago that a big old porcupine had been rifling through their orti, so I had been forewarned. That didn’t stop me, however, from feeling very aggrieved the first morning I went out to find my potato patch churned up and my netting dragged down.

Determined to protect the remaining plants, off I went to get some more solid larger-meshed wire netting thinking that, as a side-effect, this might stop my snake carnage by allowing the horrid things a largely unimpeded passage along what seems to be their favourite route. I got half way with the fence-erection that evening when I realised it was so dark that I couldn’t see what I was doing. So I tied down the remaining plastic netting as tight as I could and crossed my fingers. The next morning, Porky had been back, removed another wide swathe of potatoes and… there was another snake-monster tangled in what was left of the netting. Double whammy.

I should say, perhaps, that between the May snake fatalities and this latest incident, two more snakes (or perhaps the same snake twice) had tangled themselves/itself up in the netting. But L, who is kinder and braver and in his own undemonstrative way a much greater respecter of (wild) animals than I, had gone out armed with rubber gloves and kitchen scissors and dodged their snapping, hissing jaws to liberate them. In both cases, he was sure that the snakes in question were grass snakes rather than anything more dangerous. But the very idea of snake-rescue made my stomach churn. I certainly couldn’t watch.

I poked my completely inert newly tangled specimen with a (very long) stick and lo and behold, it started writhing. L far away on a trip. Porcupine damage to my potatoes getting rapidly worse. Me completely paralysed with the kind of snake-terror that only someone who has spent their childhood in Australia being lectured on how quickly snakes can kill you can experience. No rubber gloves operations for me.

Hanging my head in shame, and still feeling rather guilty, I am forced to admit that I just left it there to die. I propped up a stretch of the wire netting as best I could over the porcupine-entrance, turned my back on the snake and didn’t go back until 24 hours later when I could safely cut it out and chuck it. How very cruel.

Through this last stage of my ordeal one weirdly hilarious thought kept coming to me. (Was I slightly hysterical?) Examining the situation after the second porcupine incursion, it looked very much like he hadn’t accessed the potato patch through the gaping hole (had the snake snapped at him too and kept him away? That would make me feel even worse about my snakicide.) Instead, the final remaining almost-intact stretch of that flimsy stuff was completely squashed to the ground… almost as if something had launched itself at the fence, trying to jump over it, but had landed, plop, on top of it instead. I kept having visions of a porcupine, quills a-quiver, doing a flying leap in a desperate attempt to bound over the fence. Perhaps not.

To make up for these problems with the local fauna, the fireflies are very definitely out and show no signs of switching their lights off, something which usually happens around midsummer’s day. And there are still a few nightingales piping and chortling away in the valley. Glorious.

I am a garden and landscape designer, working throughout central Italy and beyond. I have lived in Italy for over 35 years – first in Rome but now in Città della Pieve, Umbria, where I have restored my country home and transformed a medieval townhouse into three rental suites. To relax, I tinker endlessly with two and a half hectares of land, some of which is my garden.
View all posts by Gardens, Food & Umbria →
This entry was posted in MUSINGS FROM UMBRIA and tagged Dutch elm disease, porcupines, snakes, Umbria. Bookmark the permalink.