There’s nothing mellow about the fruitfulness around here at this time of year: it’s full-on and aggressive, to the point where any innocent dropping-by at a friend’s place generally results in hugely insistent offers of any glut-item that happens to be dogging that person at that given time… to the extent that you’re often left wondering whether you’ll ever stop standing guard over bubbling pots and get down to something useful – like, perhaps, work.
But work trips, too, can be dangerous, as I found out today. There was no way I was going to get away from this garden-to-be without a big basket of windfall peaches. Scarred and blemished, they didn’t look too appetising. But after a little judicious removal of the bruised bits, what was left was delicious. What I didn’t eat went straight into jars. 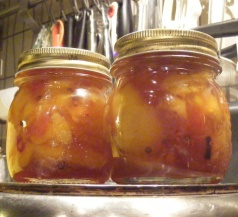 As this takes very little time to make, you should think about some pre-emptive jar sterilising even before you begin.

I prefer yellow-fleshed peaches to white ones for pickling, but this is a matter of personal taste. Whatever colour they are, they should be ripe but not squishy. If your peaches are slipstone, it will make preparation much easier. Peel the fruit, cutting out any blemishes, and remove the flesh from the stone in large-ish pieces: quarters are perfect if they come off easily.

Chop the onion roughly and place it in a heavy bottomed saucepan (large enough to hold all the peach pieces) along with the finely chopped chilli, vinegar, lemon juice, sugar and all the spices. Bring this to a gentle simmer over a very low heat, stirring it until all the sugar has dissolved. You can now tip the peach pieces in, bring it back to slightly-less-than-boiling and continue simmering gently until the fruit is soft – about 15 minutes. Don’t over-cook it: the pieces should remain whole, not turn to mush.

Now use a slotted spoon to remove the peach pieces from their liquid, and set them aside in a bowl to cool a little. Turn the heat up slightly under the liquid and reduce it by a third to a half, or until it’s fairly thick and syrupy, with slow gluggy bubbles rising to its surface.

Spoon the peach pieces into your sterilised jars (these quantities should produce enough for four 350 ml jars), and pour a little syrup into each. Slide a knife blade down the sides of the jars and move the fruit about carefully to release any pockets of trapped air; you’ll probably be able to add more of the liquid, which should come to about 1 cm from the top. You can do this a couple of times to each of the jars to make sure you release as much air as possible.

At this point I find myself facing the same dilemma described at the end of my roast tomato chutney recipe: to pasteurise or not to pasteurise? This evening, unable to tell how long it would be until we got around to eating these peaches, I opted for the heat treatment. But knowing us and our habit of making short work of chutneys &etc, it will probably prove so much wasted time and effort…

I am a garden and landscape designer, working throughout central Italy and beyond. I have lived in Italy for over 35 years – first in Rome but now in Città della Pieve, Umbria, where I have restored my country home and transformed a medieval townhouse into three rental suites. To relax, I tinker endlessly with two and a half hectares of land, some of which is my garden.
View all posts by Gardens, Food & Umbria →
This entry was posted in MY UMBRIAN KITCHEN and tagged chutney, peach, pickle, recipe. Bookmark the permalink.