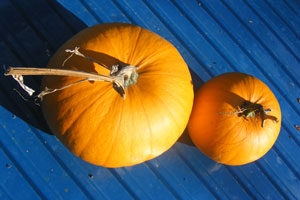 We’ve been doing festivals: the Internazionale Festival in lovely, civilised Ferrara; and the film festival in sweaty, antagonistic Rome. The former was great, as usual; the latter was, well, slightly motley. The respective settings may have helped determine my attitude, but I don’t think so. Aggravated maybe; entrenched perhaps.

As always, Ferrara filled for the weekend with great waves of mainly young people, with grubby backpacks and shining enthusiasm. This year there were fewer events that got me excited, but I think that was perhaps because of my (relative) lack of interest in the much-discussed Ukraine and what have you: I can’t follow everything, can I?

But I saw numerous debates, met some interesting people, saw some beautiful frescoes (though this last was nothing to do with with the festival). And I listened to Laura Boldrini (lower house speaker) who was impassioned and intelligent; and Matteo Renzi who was engaging and articulate. In fact, quite amazingly articulate – a stunning master of rhetoric. I’d like to think it’s more than just talk. 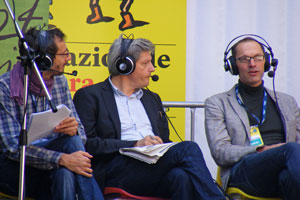 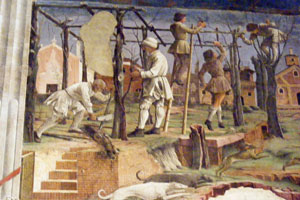 I get so angry at the snide back-stabbing that even those who should be allied with him seem to feel is their default mode. Working together – even with members of your own party – for something good is such a foreign concept in individualistic Italian politics – as in almost all of Italian life. It’s one of the country’s least appealing character traits. Especially if someone is making waves, all around him/her seem to feel the necessity to denigrate and remare contro (row in the other direction).

One unifying element in both Renzi and Boldrini’s speeches was the frustration of never being taken at face value. Whatever they say, they claimed, people presume that they are concealing something, or telling half-truths or drawing attention away from some nefarious pact they have made with one devil or another. The idea that they could be being frank is never even considered. Another infuriating Italian trait. Just as well the country has so much in the positive side of its scales.

Outside in the streets of Ferrara (in fact, Renzi was outside, in the square in front of the castle), more and more festival-goers packed themselves in, turning the evening centro into a massive concept-filled rave.

In Rome, on the other hand, I was pulling L’s big suitcase from Termini station to our hotel (he had arrived at the crack of dawn, taking his bike with him). When I got to the turnstile at the top of the platforms in Flaminio metro station, there were few people about and plenty of free exits. I pushed myself through, then had to swing the turnstile around to drag the bag through. The sour-faced middle-aged woman pressing up against the bag clicked and tutted. Ma signora, come si può – you can’t behave like this, who do you think you are? I wanted to ask her what her problem was and whether she wouldn’t like to get a life – or just slap her. This set the general tone.

The festival itself, with its tired air, didn’t help to alleviate this at all. A vanity-festival, Rome spends large amounts on films which have been seen elsewhere, without much in the way of criteria or discernment. That said, I saw Still Alice which was wonderful but very distressing; and Stephen Daldry’s Trash, a favela-feelgood, compently made with great performances by the three rubbish-gathering kids but not really remarkable except as a warm and fuzzy way to spend an hour and half of ones life – not a waste, in any way, but not world-shattering.

What struck me about Rome, though, was the changing buzz. Of course my country existence has made me more sensitive, to decibels and stink and thronging crowds of shoppers: walking down via del Corso of a Saturday afternoon is an experience akin to drowning. But it’s the relentlessness of it all that I find wearing: the main drag of the Ghetto was once charmingly down at heel and, except at weekends when the older Jewish community gathered there or when kids were clamouring into or out of the school, a quiet place. Now it’s a string of kosher fast-food joints, with raucous diners shouting across outside tables on a remarkably hot October weekend. It’s the same everywhere in the centro: food food food and milling crowds with nothing resembling a real city with its own residents going about their own lives. I swear, it wasn’t like this ten years ago.

But there were, of course, moments of joy, such as getting off the 160 bus at Teatro di Marcello and taking the badly maintained pathway that cuts around the bottom of the theatre to the eastern end of the main Ghetto street, adoring the great chunks of ruin and the feeling of following in footsteps – I love that about Rome. And it was a pleasant relief, too, sitting at a pavement table with girlfriends having breakfast in piazza San Lorenzo in Lucina at a time on Sunday before the tourist hordes descend, revelling in sharing the old stones and the sunshine and the colours of Rome with a small selection of just the right – Roman – people.

It’s good to be home though, far away from traffic and that feeling that the inside of your nostrils is turning black. It’s the season of mists – well thick fog really, down in the valley – and fruitfulness which this year is slightly less than mellow as pesky little flies have laid their eggs in profusion inside everyones’ olives so oil this year will either be pretty meaty or else very expensive, as many growers opt not to pick at all.

I drove over to the Val d’Orcia yesterday morning, to see what I hope will become a new project: down into the Val di Chiana and its clammy swirling darkness then up again to Sarteano, just below which I burst out into the most perfect perfect hot blue. The Val d’Orcia itself is currently in one of its green phases. I stopped the car briefly in the car park at Castiglioncello del Trinoro and it was all I could do not to cry at the beauty.

Spotted in CdP on a FAI Marathon jaunt:

I am a garden and landscape designer, working throughout central Italy and beyond. I have lived in Italy for over 35 years – first in Rome but now in Città della Pieve, Umbria, where I have restored my country home and transformed a medieval townhouse into three rental suites. To relax, I tinker endlessly with two and a half hectares of land, some of which is my garden.
View all posts by Gardens, Food & Umbria →
This entry was posted in MUSINGS FROM UMBRIA and tagged Festival del Cinema di Roma, Festival Internazionale, Matteo Renzi, Rome, Val d'Orcia. Bookmark the permalink.