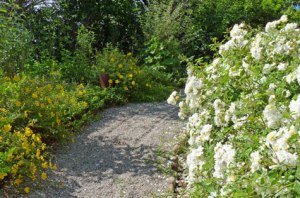 April was so splendid. May and now early June have been such a wearisome wash-out. It hasn’t been cold exactly – though often outside has been so very uninviting that what the thermometer says has little relevance. After a day of grey and dreariness, a fire burning in the stove through the evening seems essential merely to lift the spirits.

The garden is, I think, splendid… though once again, I only notice this at moments between showers or downpours when the sun breaks through and I wander listlessly outside. Actually, that’s a wild exaggeration: there are days that seem that way, but it’s difficult even at the dampest moments not to notice the magnificence of this year’s over-watered roses and the abundant palette of innumerable lush greens.

The first, extraordinary rose explosion is almost over now. Rain is mixing fallen petals with weeds that have formed a rampaging understory, impossible to bring to heel as any attempt to yank them out of the sodden ground dislodges claggy clumps of soil.

We seem to be stuck on the edge of a system. Not much more than 100km south, in Rome, C is peppering her work days and weekends with long sessions in the British embassy swimming pool, basking in what is essentially summer weather. In Umbria, on the other hand, we are taking our cue from northern Europe, where the Seine threatens to inundate Paris and Germany battles rising water.

As I build supports for this year’s tomato crop on the level outside the living room window, there are loud snufflings coming from beneath the hazels down in our field. It’s lunch time, which is an odd hour for boar to be out but youngsters are keeping the older ones up when they should really be resting. I shout ‘oy’ and the snuffling stops, then after a moment’s silence Mummy boar (I shall gender-stereotype for the sake of convenience) dashes out towards the wooded valley, trailed by two yearlings and four bounding stripy infants. At the edge of the woods, she halts, and begins grunting anxiously. She’s peering about and sniffing the air and turning worried circles. Half a minute later, tiny shapes start scuttling towards her: one, two, three babies for whom the husks of last year’s hazelnuts were more enticing than I was worrying.

They all disappear down the slope together, Mummy expressing all her anger (and yes, I’m anthropomorphising shamelessly) in loud sharp squeals, making her motherly terror and her displeasure with her reckless progeny abundantly clear.

I remember being taken to a pig farm as a child – on a family trip or school visit – and being surprised at how the piglets were fenced off from their mothers, and even more shocked at the explanation. Left together, we were told, the mothers were likely to trample and even eat their offspring in their mindless determination to consume. How much numbing contact with humankind, I wonder, does it take to turn an animal with an inescapable instinct to care into a desensitized production vehicle?

A snake has taken up residence in the post box. I don’t know what kind of snake it is: I don’t generally stick around long enough to check when I find it perched in its favourite spot, on the rim just beneath the top flap.

The other day I lifted the flap very gingerly as usual with a stick. There it was, and it began slithering away swiftly. But in my panic I dropped the flap on it, pinning it firmly in place round about mid-way along its long, skinny slimy length. It was not a happy snake. Not that I was a particularly happy mail-seeker either. What to do?

It was thrashing, furious and/or terrified and looking venomously and with evil intent (or so I suspected) in my direction. I felt – and still feel – incredibly virtuous, not to mention courageous, at having picked up my stick, opened the flap and let the pinned-down snake wiggle off into the undergrowth. Do snakes learn from experience? Will it now abandon its post (haha) in our letter box?

All winter we observed and commented on the huge coaches that pulled up, one each evening, in the dark, outside the ill-fated Logge del Perugino hotel. (The hotel is ill-fated mostly because right from the start it decided it was ‘above’ the locals… who responded by snubbing it and its restaurant, leaving it gasping for air for those nine months of the year when there’s not a shadow of a tourist. You don’t survive around here if the locals don’t eat in your restaurant.)

If you passed just at the right moment, you saw it disgorging its cargo: disorientated Chinese tourists. An off-season bed and meal at the Logge, I presume, cost a fraction of what they’d pay in either in Rome or Florence. And equi-distant between the two, it couldn’t be better placed for whistle-stop city visiting: perfect for low-cost group travel, and by the look of these tourists, this was the lowest possible.

The other evening, however, the coach pulled up when it was still light and the Chinese did the unthinkable. Rather than filing obediently into the dark hotel, they ambled up the road into town and fanned out. It looked so odd. We’re used to all sorts in CdP. The group of refugees from, I believe, Cote d’Ivoire whom the town council occasionally dispatches to remove rogue weeds from roadsides is now part of the local fauna. But these elderly, Mao-jacketed (who knew they still existed?) Chinese were an odd mirage. Though only as odd as these poor bewildered-looking coach travellers seemed to be finding us.

Some animal has decimated my beautiful broad beans. They have neatly nibbled the beans out of the pods. Then trampled the worked-over plants to get to fresh offerings beyond. It’s precise, neat deer-work, not heavy-trottered boar floundering. Heart breaking.

The deer are down there in the field most evenings. As I step outside the kitchen door they turn their heads towards me, still chewing, then freeze. But they don’t run. I have to make sudden movements before they bounce off into the woods. Before they bother to scatter I yell abuse at them, calling them all kinds of things and making dark threats. I can detect just a hint of contempt in the high-headed way they stare back.

One evening there was a medium-sized deer right up at house level, past the breakaway patch of vegetable garden. (Was it this one who nibbled one of my tiny tomato plants then spat it out? I replaced the seedling and put up a fence around the bed – far too low to keep a determined deer out of course, but in general I find most animals can’t work up the enthusiasm to break down or leap over even flimsy barriers: no doubt they can find plenty to ravage elsewhere.) It stood and surveyed me, almost as if it were the owner and I the interloper, for many long seconds after I opened the big living room window and began telling it that its presence wasn’t welcome. Then it strolled off.

There’s an interesting multi-way tug of war going on around the new house, with various opinions on how things should proceed conspiring to ensure immense frustration. The town council has seen the plans and has given its theoretical OK. But in order to start work, we have to notify this same town council that we’re starting… and because I am moving stairs and such like, that can’t be done until a structural report has been lodged with the provincial council.

When I rushed up to town this morning, all excited that we could finally start, this hitch was explained to me. But in a very round-about way. The structural report has not been compiled, never mind filed. Because Stefano the builder hasn’t knocked a hole in that bit of floor and ceiling where we’re putting new stairs. He hasn’t done this because he’s scared that he’ll find a soft landing and the engineer will want to pour tons of concrete in. But none of those involved has fully explained to me that the hole is an essential step to getting the plan drawn up. I don’t know who to get annoyed with or whose heads to bash together. I just want to scream at everyone. So they all think I’ve got it in for them unfairly. Aaagh.

This point too will pass. At least there are builders in the house, with their bucketsful of equipment. The horrible plastic fake wainscoting has gone from the entrance corridor. Doors have been removed to leave gaping brick mouths. The thigh-high weeds in my little garden have been hacked down to make space for piles of debris. There’s a feeling of (very tenuous) progress.

I am a garden designer, working throughout central Italy. I have lived in Italy for over 30 years – for many years in Rome but now in the wilds of Umbria where I have fixed up one wreck of a house, am working on another, and tinker endlessly with two and a half hectares of land, some of which is my garden.
View all posts by Gardens, Food & Umbria →
This entry was posted in MUSINGS FROM UMBRIA and tagged boar, deer damage, Pieve suites, snakes, Umbria. Bookmark the permalink.