The slowest-moving project in the history of vegetable gardens took a significant step forward over the weekend. We were meant to be on this, cruising towards Elba, but for various dull reasons it all fell through. I took that as a sign that I was destined to do something more prosaic, though arguably ultimately more satisfying. So I applied myself to the orto. (And will get to go boating in June, I hope.)

It has taken me a long time to get round to it but now I have more planted in there than the onions, garlic and potatoes which I stuck in weeks ago. It was about time. My runner beans were about to escape from their little pots in the greenhouse, and every local house I passed had some wizened old man outside, putting tomato seedlings into the ground and making me feel guilty and behind-hand.

My excuse to date (aside from work commitments and iffy weather just when I’d hoped to be outside digging) had been rather too many electrical storms forecast: I didn’t want to lose my precious plants to battering hailstones. But we haven’t had a single one of those. And the season is too advanced for my kind of sloth.

As I dug and hoed and raked and generally did battle with the not hugely wonderful soil I have in my new vegetable garden (I’m adding vast amounts of compost in an attempt to improve) I looked up to see a porcupine sauntering nonchalantly across the carpark outside. Mid-afternoon. Like he owned the place. When I invited him to f-off, he shuffled his quills about half-heartedly, manoeuvred himself around slowly, and strolled away in an unconcerned fashion. Brazen.

Around easter, there was a series of bank holidays, on one of which the phone rang, surprisingly, well before nine in the morning. It was the Romanian housekeeper of our Canadian neighbours who were away at the time, and she was clearly fighting back the tears.

“Signora Anne! I don’t know what to do!”

I imagined a disastrous break-in, or at the very least a dead dog.

“He’s destroyed the potatoes. There’s nothing, nothing left. Trashed. What can I do?”

The housekeeper was convinced it was the badger that wanders the area. One entrance to its sett is in a bank just up past Mario’s house, and he often chooses the moment we’re passing in the car at night to dash across the lane. But omnivorous badgers eat earthworms mostly – hundreds of them each night, I’ve read. They’ll eat fruit, nuts, rats, toads, baby hedgehogs… all kinds of things. They don’t as a rule appear to be particularly interested in potatoes. Unlike porcupines. Porcupines are herbivores, with a passion for bulbs and tubers. Our porcupine was a much better bet in this case.

I tried to calm the housekeeper down. I told her there was little you could do against these fiendish burrowing beasts. I suggested that she could try leaving a radio on down in the vegetable garden at night.

She didn’t seem very impressed with my philosophy. Which was, I have to admit, more smug and far less blasphemous than my reaction when I discovered that our neighbourhood istrice had descended on my hemerocallis, dahlia and iris for its dessert, tossing well formed plants into piles of upended soil and – infuriatingly – nibbling the bulbs without actually consuming them.

So what exactly was this (generally nocturnal) beast doing on its most unusual afternoon stroll yesterday? Was it sizing up my potato patch? Doing a bit of a recce? I’m under no illusions. To have any hope of keeping it out, I would have had to sink the Cor-ten edging of the garden into the soil for 50cm or more. Instead, it goes below the surface for about 10cm. Out the back of my new orto on the valley side I keep finding deep holes, usually with rocks in the bottom. Is this the porcupine having a go at getting in, but knocking his head on a stone, thinking it’s not worth it and going elsewhere? Very likely. Will the time come when he finds a spot where sliding under the edging is simple? I wouldn’t be surprised. I won’t, naturally, be feeling very philosophical if he does.

I hope, at least, that he has identified where the potatoes are and, if he gets in, that he goes straight for them. The worst thing is when these predators crush other things beyond redemption in their mad rush to their goal.

In my fit of activity I planted out tomatoes (four varieties, with supports), runner beans (with a rather fine net to clamber over), capsicums of various sizes and colours (far too many for our purposes but they’re planted so close so I can rip some out if they don’t perform well enough) and aubergines (ditto). My peas now have a bit of net to grow up, though I’d be amazed if they ever reach the net: I stuck some random peas in the ground far too late, then forgot they were there so failed to water them through our dry dry early spring. I put out some cucumber plants with a teepee to crawl up. And I even got courgettes into their little holes. I wonder if they’ll produce there, or simply succumb to the powdery fungus that always used to envelop them in the old orto.

If there’s one thing that the prowling istrice has done, it has done away with any lingering feelings of guilt I may have felt towards animals and their favourite snacks. I did have a vague twinge when finally I ripped up my immense forest of bolting cavolo nero outside the living room door. This remarkable specimen had survived 18 months, providing endless dark crinkly leaves for us, and tree-like trunks for some animal – I never did work out which – to scrape away at night after night, dislodging the dry bottom leaves in order to gnaw at the waxy outer layer of the thick stems. You could see the teeth marks.

I found this ‘we take the high part, you take the low part’ sharing out of resources rather charming until other things – lovage, hyssop – started coming up healthily around the base of the cavolo, only to be crushed in the nightly marauding of the unidentified animal. Still, I was aware as I pulled up the huge bushes – now with hardly any edible leaves – that I was depriving this creature of its nightly fun. Now with my new vegetable garden under threat I don’t give a damn. Animals are the enemy. Let them get their food elsewhere. I just want them to leave my plants alone. 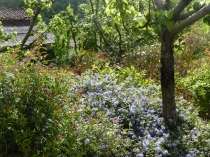 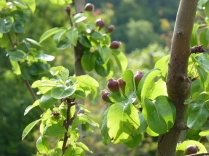 There are moments when Italy infuriates you, like when you check on line to see how your application for Italian citizenship is going and it’s stuck at the same stage of the grindingly slow process that it has been in for the past seven months. And others when you think, “wow!”

My ID card was about to expire, so I went to the town hall last week to renew it, a process which lasted about three and a half minutes and which cost €5.40. A pleasant, smart woman tapping information into a computer. The usuals – name, occupation, height. She was a bit nonplussed about my hair colour. How do I describe it these days, since I decided to go natural? I tell people that it’s silver, but that doesn’t seem to be an officially accepted term. She went for brizzolato – grizzled – which for me has overtones of a weathered old sea dog or woodsman, but let’s not dwell on that.

Other questions. Organ donation: yes I want to, no I don’t want to, I don’t want to decide now. How extremely sensible to have this on your ID card. Married state: do you want it to appear?

“Privacy” has become an Italian word, and an Italian obsession: when it comes to bureaucracy, things are kept very secretive. But my ID card renewal came just days after C and I had become very hot under the collar about the daughter of a family friend who had changed her surname on Facebook the very day of her wedding. Why is it that British women still automatically adopt their husband’s name the moment they marry? Why would anyone want to abandon a name that has identified them their whole lives from one day to the next and take on the completely different name of someone else, a name that has everything to do with someone else and nothing to do with you? Does this mean that you’re content to see your identity as somehow being engulfed by that person?

In Italy, women keep their own names. This has nothing to do with feminism. I rather suspect that it might have had its origins in sparing overloaded bureaucracy one further complication. But the codice civile (art. 143) states that women keep their birth surnames. And as of 2016, you can give your children the mother’s name instead of, or as well as, the father’s. So finding out that nowadays you don’t even have to own up to being married at all is very refreshing. It’s an odd twist to the idea of “privacy” but hey, why not? Why does anyone who happens to look at your ID card have to know your married state? What can that possibly say about you that other people have an automatic right to know?

I opted to hedge on the organ donation. And I proudly declared myself married (though fiercely keeping my own name.) But I felt very grateful to be allowed to have my say on both.

And the world’s slowest moving building site? I’m taking deep breaths and trying to keep my blood pressure down.

Between haranguing the builder and veering towards despair, I dwell on lovely, baby steps forwards like shiny new shutters or metal doorframes – something I had  imagined as simplifying things given my loathing of regular doorframes, but which on the contrary came to seem like an almost insurmountable hurdle – finally installed. Small mercies.

I am a garden and landscape designer, working throughout central Italy and beyond. I have lived in Italy for over 35 years – first in Rome but now in Città della Pieve, Umbria, where I have restored my country home and transformed a medieval townhouse into three rental suites. To relax, I tinker endlessly with two and a half hectares of land, some of which is my garden.
View all posts by Gardens, Food & Umbria →
This entry was posted in MUSINGS FROM UMBRIA and tagged badgers, bureaucracy, ID cards in Italy, keeping maiden name in Italy, orto, porcupines, vegetable garden. Bookmark the permalink.