Today has been a blustery day of wild, bruised skies and the hint of a chill – all the signs of storm with hardly a drop of rain falling.

Yesterday was warm blue, and humming with winged insects.

I went out mid-morning to do some shopping, and returned before noon to find a helicopter sitting in the neighbours’ field. We had been woken by shooting in the valley. Have the hunters shot each other in the mist again, I asked L (a popular tale though I’m not sure that it’s much more than a rural legend). Or are they air-lifting boar carcasses out these days? 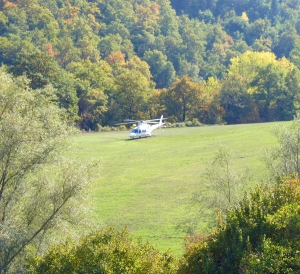 It was neither of the above. A hunter from Perugia had plummeted down a little ravine, suffering massive trauma when he landed on his head. (The story in town now is that he fell as a result of a heart attack, not clumsy footing.) He died shortly after his fall. The helicopter clattered out of the field, leaving the body where it was until the coroner could get there. And an insect- and bird-filled quiet settled back over our sunny valley. (***It soon became clear that he had in fact been shot by a fellow hunter.)

Until an hour or so later, when cries of wrenching pain echoed up to us. Some loved one had arrived, to pour out her grief in a place where the only loud noises we ever hear are mewing buzzards, barking deer or the occasional power tool or piece of farm machinery.

She surely won’t have noticed the loveliness of where her man died. It would be nice to think that one day she’ll remember it, and feel a tiny wave of bitter-sweet comfort.

For as long as I can remember in my CdP existence, one of the signs that you’re nearly home after a weary journey has been the execrable surface beneath the long row of umbrella pines (Pinus pinea) on the road up from Po’ Bandino. The situation started bad, then deteriorated year by year – or rather winter by winter as snow and ice and and damp and inexcusable neglect did their darnedest. But there has always been a silver lining to the entropy: however travel-jagged you’re feeling, you’re snapped back to life for that final stretch as your neck jars dangerously over the ridges.

For a cyclist like L, the slalom is a nightmare. For a cyclist’s wife it’s even more so, as I imagine him swerving to avoid an eruption only to be mowed down by the unsuspecting HGV that has crept stealthily up behind to overtake at that precise moment.

Over the past few days, while my back was turned, graders and asphalters were unexpectedly at work. Now it’s smooth as a baby’s bum. I miss and don’t miss the shocks. We glide homewards now, musing on changing times.

Last weekend I set off with my earth-moving colleague Giuseppe to identify the proper place for an underground water holding tank on the property of clients. We stalked about for a while, debating the relative merits of 20K litre plastic and 30K litre cement, seeking a spot where water-delivery trucks (there’s no well here, yet) could get close enough to pump in their load.

As we examined, Giuseppe lifted the lid on an old well, or maybe a defunct cistern – one that had been experimented with for reservoir purposes years ago, I had been told, and found to leak, fast. When he had rigged up his powerful spotlight, what appeared was a thing of unexpected beauty: a circular space, about two and a half metres across and six or seven deep, of perfectly undamaged brick. The only intrusive roots grew down from the surface, not through the walls. Far down before the stratum of mud at the bottom, there were small brick arches all around.

This was a job for my builder/restorer/(and serendipitously) speleologist. I called him and demanded he join us, immediately.

Some time later he did.

No cistern this, he said. This was a well. The mud at the bottom probably fills a lower space – another metre or maybe more. There must have been a vein that flowed through the arches, depositing water into the lower area, to be pulled up to the surface in buckets.

A vein of water. At six or seven metres. How extraordinary. And presumably it was a good, reliable one if they went to the trouble of constructing such a sturdy well to harvest it.

In these parts nowadays, it’s a miracle if you find water at 50m. The norm is around 80m. I’ve heard of cases in which they had to go down to 120m to find a drop. Over this dry dry summer, I’ve heard many people lamenting that their hitherto-bounteous wells have evaporated.

What have we done to our ground water? All right, this well may have been seriously old – a hundred years? Maybe more? But still, if ground water has retreated in so dramatic a fashion over such a relatively short time in an area which is so thinly populated, that doesn’t bode well for anywhere. Is it bad management, or the ground beneath our feet protesting at our use of resources?

There can be little doubt that future wars will be fought over water if obtaining it requires perforation as if for an oil well. I find the thought deeply unsettling.

And talking of drought – on and on and on it drags. Very occasionally – like today – clouds rush over, but pass us by. (L set out twice on his bike today, and twice returned like a drowned rat: somewhere they had a bit of rainy relief.)

Despite unseasonably glorious conditions, I have already filled my early-autumn with foul colds – something I’ve never been particularly prone to.

“So how much time did you spend outside in the summer?” a nutritionist friend asked when I moaned about it.
“You must be joking! Do you know how hot it was here?!”

How many times did I write about our troglodytic existence, exiting from the house blinking like animals freshly awoken from a long hibernation in the cooler dusk?

“Well there you have it,” she said. “Vitamin D deficiency will decimate your defences.”

I’d never thought of it.

Apparently it’s common among pale-skinned people in very hot places. The only efficient way of ensuring adequate vitamin D intake is letting the sun help your body make it (butter and oily fish help a little). But you’re told to avoid the sun’s skin-wrinkling rays, and cover yourself with slap. You’ll never catch me outside without factor 50+ and a hat. And in this summer of extreme temperatures – plus too much to do in town to dedicate much time to my garden – I spent even less time that usual in the too-hot-to-be-fresh air.

Now, any sensible person would go and get their vitamin levels checked. Having ascertained that you can’t do much damage with it however much you ingest, I’m just taking pot luck and dosing myself from a bottle. For someone who rarely takes medicines or supplements, is this sensible? Right now as I battle the hacking cough of my second cold in as many months, I don’t really give a damn.

Returning home the other evening, as I came down our lane, one very large and one quite small boar where standing beneath the vast oak that overhangs the road just before Mario’s house. I drove up slowly, expecting them to scarper. But they stood and watched me and munched the acorns scattered on the road. I thought I was going to be able to pull up bumper-to-flank. But in the end they gave me an “oh if you insist. This is terribly dull” look and sauntered off. The cheek of it. 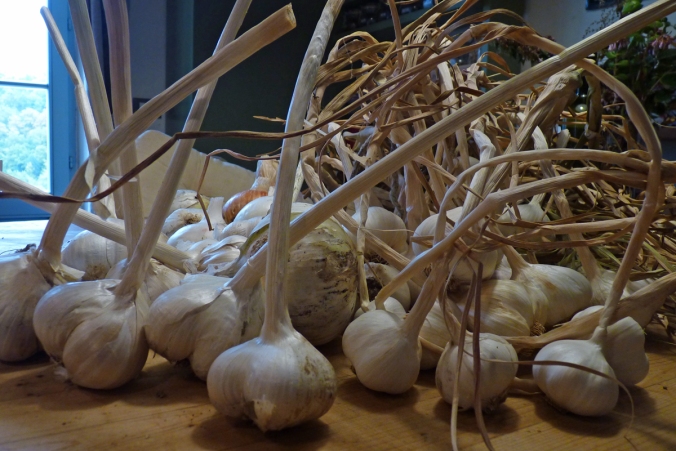